Sal Indelicato, former Supervisor and Historian for the Town of Cochecton, has compiled this information from various publications, writings, articles and news sources.

Previous writings indicate that Cochecton was either the first or the second permanent settlement in Sullivan County. Records show that a group of exploring Swedes, who traveled from Connecticut, settled along the Delaware River in either 1638 or 1639 where the hamlet of Cochecton presently exists.

Cochecton’s fertile flats (“Cushetunk” as it was called by the Indians meaning “low lands”) were abounding in fish, fur and game. Its proximity to the Delaware River, which led to Philadelphia, made it a natural for a permanent settlement. While land disputes occurred among New Jersey, New York and Pennsylvania, for the most part, they were settled tentatively around 1769 but differences among the three states continued for a number of years.

The Town of Cochecton is comprised of 38.06 square miles making it the second smallest town in Sullivan County. While it has several small hamlets, it has no cities or villages that lie within its boundaries. We, its residents, at the beginning of the Twenty-first Century find our community tranquil, scenic and inviting.

The Skinner family, who migrated from Connecticut, was among the very first families in Cochecton. The elder Skinner was murdered shortly after arriving in Cochecton. It was never determined whether he was a victim of the Indians or other settlers. The Skinner family claimed control of some 30,000 acres in the region. The Six Nation Indian Confederation also claimed ownership, as did the Lenape and the Delawares, who asserted their rights over the Six Nations. It is therefore easy to understand why land disputes in the region continued for many years.

Pre-Revolutionary War Cochecton was considered an important post to Sullivan County’s great fur trade. The plentiful shad that ran in great schools in the Delaware River compounded its importance.

The Tylers were among the original settlers and previous writings show that the Tylers purchased land from Daniel Skinner, who was known as “Admiral” based on his fame as being the first person to pilot a lumber raft from Cochecton to Philadelphia. Tyler was said to have fathered twenty-two children.

The Conklin family was early settlers, as was Ebenezer Taylor of Orange County who came up river in 1790 and founded a trading post. He married Eleanor Calkin, daughter of Dr. Calkin, and became the first merchant of the town. He was active in the promotion of the Cochecton-Newburgh Turnpike, which opened in 1810 and was considered the first major toll road to the western wilderness. Mr. Taylor became the first postmaster of Cochecton when President James Madison established a post route through the town. He also ran the first licensed tavern in the town and died in 1821.

In about 1800, Charles Irvine, an educated Irishman, was convinced by a group of lumbermen he met in Philadelphia to move to Cochecton. He did so and married a daughter of Dr. Calkin. It should be noted that same year the first school was formed in Cochecton. Mr. Irvine later became a hotel keeper—"Irvine’s Hotel”— catering to travelers, raftsmen and lumbermen. Mr. Irvine later moved to the west branch of the Susquehanna where he died about 1825. Many early Cochecton settlers in an effort to seek greener pastures would often join westward bound immigrants, however, the Calkin, Tyler and Skinner families for the most part did not move on.

During the mid-l9th century leather tanning was an active industry in Sullivan County and the site of one of the larger tanneries was in Stevensburgh (Cochecton Center), constructed in 1840 by Alfred and Fletcher Stevens, who purchased a parcel along the western branch of the Ten Mile River where both hemlock and water were in abundance. The tannery was 350 feet in length and employed some 30 workers during the peak of its operation. Along with other Sullivan County tanneries, much of the leather used by the Union Army during the Civil War was produced in the tanneries such as the one in Stevensburgh. Over the years, farming has been a major industry in Cochecton and during the insurgence of the resort industry. The farmhouse became a hotel. Cochecton had its share of hotels, particularly near Lake Huntington, a natural beauty spot that was inviting to the tourists who journeyed to the mountains.

The first town meeting was held in March 1829 and reportedly was held at an inn/tavern at Taylor’s Eddy, which was located above what is now known as “Old Town” near County Road 114. The inn was used for many years as a chief meeting place for political caucuses, town meetings, elections and was also a favorite for the many raftsmen who traveled the Delaware.

According to an article carried in “Cochecton Papers II,” the building still stands at the junction of Route 97 and the old Cochecton-Fosterdale Road. 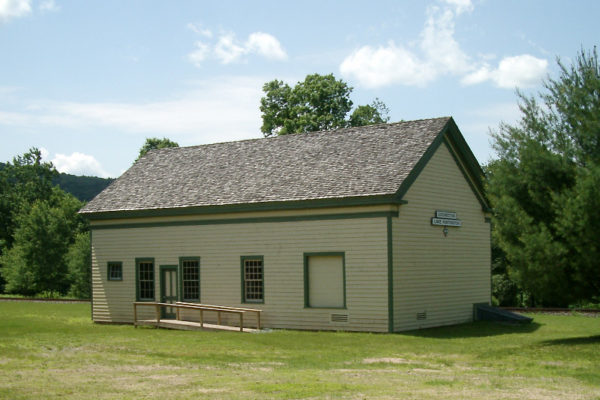 In the early days, Cochecton found itself at the western end of the Cochecton-Newburgh Turnpike, a main over-land route between Cochecton and Newburgh. Today portions of this turnpike, which lie within the Town of Cochecton, are known as County Road 114 and State Highway 17B. Many of the old traditions that followed the earlier settlers to Cochecton remain today.

The Town's western border is graced-by the pristine Delaware River, which is shared by canoers, rafters, swimmers and fishermen alike. Route 97, a scenic highway, traces itself along the Delaware River as it travels through the town where the reconstruction of the oldest railroad station in New York State has been completed. This railroad station was dismantled from its original site in the hamlet of Cochecton and relocated to the northern outskirts of the hamlet along State Route 97. While the old country store and Riley's Ice Cream Parlor are mere memories of the recent past, still Cochecton is the home for "Cheers," a tavern that primarily caters to local residents from both sides of the river, and an ultra-modern feed mill—Cochecton Mills, which is operated by Robert and Dennis Nearing, who are descendants of some of the earliest settlers of the area. 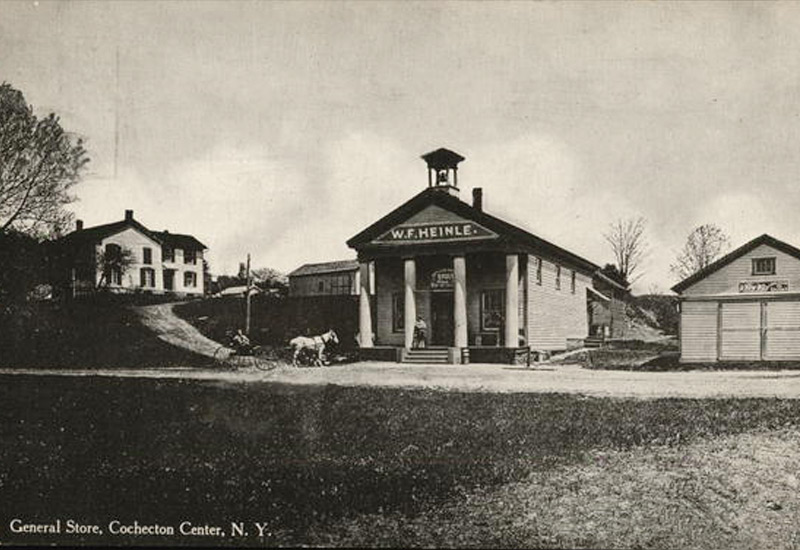 In addition, the Town of Cochecton is the home of a mid-19th century general store, which is located along State Route 52, in the hamlet of Cochecton Center, formerly known as Stevensburgh.

Heinle's General Store was founded by William F. Heinle in 1840 and remained in the family until his great grandson, Brian Heinle, sold it to Paul Shin in 2006. 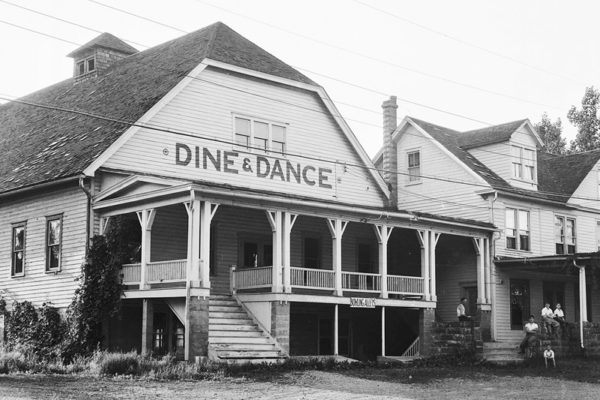 The hamlet of Lake Huntington offers travelers and residents an assortment of eateries, which include the Lakeshore Luncheonette, Our Place on the Lake, and Paesano's. The Nutshell, a local tavern, offers a spacious facility for banquets and the like. Lake Huntington is also home the Lake Huntington Service Center and for Gasko & Meyer Beverage Distributors, one of the largest beverage distributors in Sullivan County.

As a result of a three-district school merger, the Sullivan West High School campus at Lake Huntington opened for its first fall session in September of 2003. With the school's opening, a rebirth of activity descended on Lake Huntington transforming this old resort community into a home for learning and cultural events.

Lake Huntington, for the most part is a private lake, but does have a Department of Environmental Conservation access. It lies in the center of the town and provides sportsmen with boating and fishing opportunities, as well as other water recreation.

Fosterdale lies at the crossroads of Route 17B and Route 52. This historical hamlet features Katy's Bed and Breakfast and is the home of the mid-summer "City Games," sponsored by the Fosterdale Motor Lodge.

The resurgence of this area is evidenced by several active businesses, such as, a convenience store/gas station, ice cream/chicken take out stand, which is accompanied by a gift shop specially featuring homemade candy and a hot dog stand. The Fosterdale Equipment Service Center provides the equipment needs for homeowners and farmers alike.